Representatives from the two latest world nuclear players are meeting in Tehran this past week. 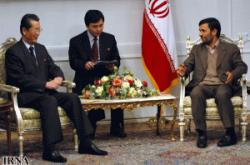 The Iranian News Service reported that North Korea will spare no eforts in improving its ties with Iran:

President Mahmoud Ahmadinejad here Saturday evening stressed that progress of the world is in dire need of establishment of peace, dialogue and tranquility.

President Ahmadinejad made the remark in a meeting with the visiting Chairman of North Korean Supreme People’s Assembly Choe Thae Bok.

“Today, certain powers are trying to achieve their hegemonic objectives through causing conflict and tension among different nations and countries,” he said.

Pointing to interference of arrogant powers including the United States in domestic affairs of other countries and causing discord among nations, he added, “Various international issues including problems between North and South Korea can be settled through dialogue and understanding.”

The Islamic Republic of Iran calls for disarmament of the entire world including the Korean peninsula from all kinds of nuclear weapons, the Iranian president reiterated.

Tehran and Pyongyang share identical views regarding several international issues, he said underlining the need for making use of the existing potentials in both states to help further expand economic cooperation between the two sides.

Choe, for his part, lauded resistance of the Iranian nation and government against conspiracies of the global imperialism and the US.

The Los Angeles Times is also reporting on these meetings between the two rogue nations.