Why the Republican loss is so devastating. 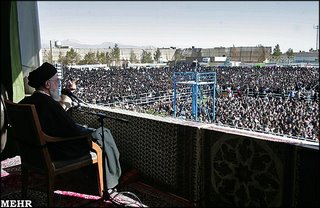 Iranian Leader Ayatollah Khamenei called the democratic win in the US a great victory for Iran during Friday prayers in Tehran.
Mehr News reports:

Supreme Leader of the Islamic Revolution Ayatollah Seyyed Ali Khamenei said on Friday that the Republicans’ defeat in U.S. mid-term congressional elections was a rejection of President George W. Bush’s “war-mongering” policies and a victory for Iran.

“This is not just a U.S. domestic incident; it is the failure of Bush’s war-mongering and aggressive policies,” Ayatollah Khamenei told well-wishers in Damghan, Semnan Province.

“As Iran has always been the target of Washington’s hostile and war-mongering policies, this defeat is a victory for the Iranian nation at the current political juncture,” he said.

“Today with the failure of U.S. policies in Iraq, Palestine, Lebanon, and Afghanistan, the U.S. threats are seen as empty,” he added.

The Leader also denounced the Zionist regime’s ongoing atrocities in Gaza, saying that Israel lost face in its 34-day war against Hezbollah and is trying to get revenge in Palestine.

“The savage Zionist regime’s crimes in Gaza proved once more that it is useless to hold talks with this occupying regime,” Ayatollah Khamenei stated.

The bases are now covered…
Every major enemy of the US is celebrating the democratic win on Tuesday!

The “Axis of Evil” weighs in:

Oh, and… China was happy too.

Powerline has more on the democrat’s biggest fans.