The Iranian regime today announced that with the democratic wins yesterday, they look forward to the American exit from Iraq.

(So does John Murtha!) 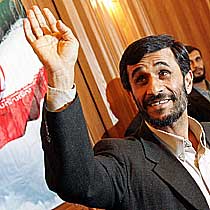 Iran welcomed the big Democratic win today and are anxious for the withdrawal of US troops from the region:

Head of National Security and Foreign Policy Commission of Majlis Alaeddin Boroujerdi said, “Democrats victory in the US election will prepare the ground for a smoother exit of American from Iraq quagmire created by President Bush.”

In an interview with IRNA here Wednesday, Boroujerdi said, “Considering the unsuccessful policies of President Bush and the Republicans in relation with important regional issues such as; Afghanistan, Iraq, extremism and notorious political mistakes of Neo-Conservatives, the situation will visibly change in the United States.

Meanwhile, Syria was also pleased with the results from Tuesday’s election:

Most governments across the region had no made any official comment, but some foes of the United States have reacted harshly.

“President Bush is no longer acceptable worldwide,” said Suleiman Hadad, a lawmaker in Syria, whose government has been shunned by the US.

But, not everyone in the region was happy about the democratic gains. Israelis are concerned about what this all means:

The Jerusalem Post has more to say on the democratic win last night:

Most Israelis also see Bush as a strong ally against Iran‘s hard-line president, Mahmoud Ahmadinejad, who has said repeatedly that Israel should be destroyed. Israel sees itself as the primary target of a nuclear-armed Iran.

“Without the political support at home and in his party and among the American public, a decisive military or diplomatic move (by Bush) against Iran seems less and less likely,” he said.

“Some Israelis are worried about the notion that the Democrats tend to be oriented toward multilateral diplomacy. For many Israelis, having European powers and other countries join the Middle Eastern conflict is bad news,” he said. 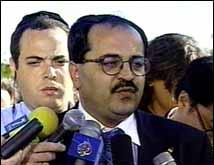 The Republican Party’s loss of control over the US House of Representatives was good news for United Arab List MK Ahmed Tibi, who praised Americans on Wednesday for voting against the party of US President George W. Bush.

Tibi was one of several MKs who reacted to the American election that could have a significant impact on the future of US policy in the Middle East.

“Bush’s policies are anti-Arab, anti-Islamic and anti-Palestinian and encourage terror around the world and the way the neo-conservatives related to the Arab world was outrageous and humiliating, so I am happy to see [the Republicans] lose the election,” Tibi told The Jerusalem Post.

The AP even noticed this concern today by Israelis.

“Of course, the citizens of the United States are humans with a conscience. It’s a reprisal vote against the war in Iraq, against the corruption” within the Bush administration, Venezuelan President Hugo Chavez said. “All this fills us with optimism.”