During Friday prayers in Tehran the Iranian Regime claimed that the US and Zionists were behind the assassination of Pierre Gemayel in Beirut: 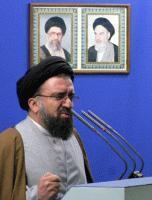 “All proof and evidence point clearly to the fact that the US and Zionists are behind the assassination because the US State Secretary Condoleezza Rice had earlier disclosed that many assassinations would take place in Lebanon; large amount of weapons have also been shipped to the US Embassy in Lebanon and Gemayel too was assassinated with the same arms,” said Khatami in his second Friday prayers sermon.

At least three gunmen rammed their car into Gemayel’s vehicle as it was traveling in Beirut’s Christian neighborhood and then riddled it with bullets from their silencer-equipped automatic weapons at pointblank range, witnesses said.

Repeating the talking points of the Far Left, Khatami also says he looks forward to the end of America:

Addressing thousands of Tehrani worshipers at this week’s Friday prayers, Hojjatoleslam Ahmad Khatami said, “The US citizens’ message, cast in the ballots with their votes was that they do not want their children to be sacrificed for the arrogant waywardness of a dictator called Bush.”

Referring to the Supreme Leader’s recent remarks on the fate of the US empire, Khatami reiterated, “As his eminence has mentioned, the era for very gradual downfall of America has already begun.”