Hezbollah Shia supporters protested what they said were insults against Hezbollah leader Sayyed Hassan Nasrallah at the funeral of an assassinated anti-Syrian minister Pierre Gemayel earlier in the day by blocking the road to the airport on Thursday night. 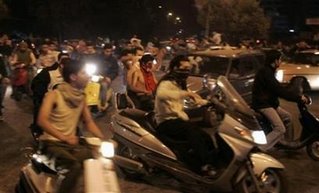 Lebanese Shi’ite Muslims protest in the street in Beirut suburbs November 23, 2006. Hezbollah will take to the streets next week to try to topple the government, political sources said on Friday, in a move that would stoke tension in a country already reeling after the assassination of a minister. (Mohamed Azakir/Reuters)

Michael Totten has more on the latest cabinet developments.

From Beirut to the Beltway has video from the funeral yesterday.

Reuters also has video from the massive funeral at Martyr’s Square. 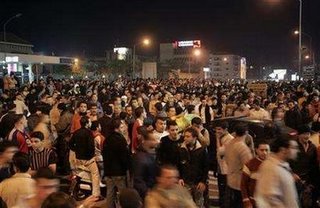 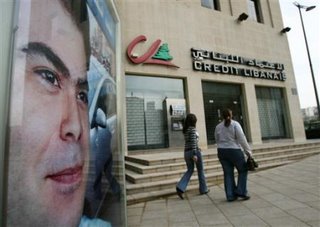 Two Lebanese women pass by a poster of late Christian politician Pierre Gemayel in front of a closed bank in down town Beirut, Lebanon Friday. (Yahoo)

With tension running high a day after a massive demonstration outside the funeral of Industry Minister Pierre Gemayel, factories, banks and financial institutions closed on orders from business community leaders who held a meeting Thursday.

Though many small shops remained open Friday, many schools kept their doors closed and traffic was thinner than normal on Beirut’s usually bustling streets.

The two-day strike “was to raise the voice against this crime,” a statement from the business leaders said. It called on government and its opponents to break the political deadlock and urged the Cabinet and Parliament to “take national decisions … engage in dialogue and stop making threats of street protests.”

The businesses are striking to urge the government to go ahead with the Hariri tribunal. 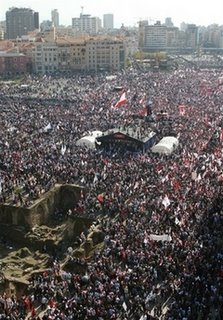 Lebanese anti-Syrian protesters carry flags and placards at the Martyrs’ square as they gather for the funeral of slain Christian government minister Pierre Gemayel in Beirut, Lebanon Thursday, Nov. 23, 2006. (AP)