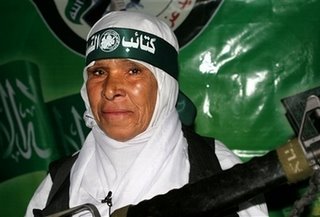 In this photo released by Hamas, Thursday, Nov. 23, 2006, Palestinian Fatma Omar An-Najar is seen before carrying out a suicide bombing next to Israeli soldiers in the northern Gaza Strip.

The 64-year-old Palestinian grandmother blew herself up near Israeli troops sweeping through northern Gaza on Thursday, accenting a day of clashes and rocket fire that threaten to derail fragile efforts for a cease-fire. (AP Photo/Hamas, HO)

Hamas took credit for that attack:

The militant Hamas, which is in charge of the Palestinian government, claimed responsibility for the suicide attack and identified the bomber as Fatma Omar An-Najar. Her relatives said she was 64 — by far the oldest of the more than 100 Palestinian suicide bombers who have targeted Israelis over the past six years.