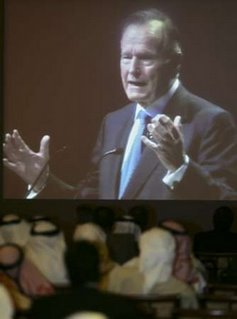 Former President George H.W. Bush took on Arab critics of his son Tuesday during a testy exchange at a leadership conference in the capital of this U.S. ally.

“My son is an honest man,” Bush told members of the audience harshly criticized the current U.S. leader’s foreign policy.

The oil-rich Persian Gulf used to be safe territory for former President Bush, who brought Arab leaders together in a coalition that drove Saddam Hussein’s troops from Kuwait in 1991. But gratitude for the elder Bush, who served as president from 1989-93, was overshadowed at the conference by hostility toward his son, whose invasion of Iraq and support for Israel are deeply unpopular in the region.

Bush, 82, appeared stunned as others in the audience whooped and whistled in approval.

A college student told Bush his belief that U.S. wars were aimed at opening markets for American companies and said globalization was contrived for America’s benefit at the expense of the rest of the world. Bush was having none of it.

“I think that’s weird and it’s nuts,” Bush said. “To suggest that everything we do is because we’re hungry for money, I think that’s crazy. I think you need to go back to school.”

The hostile comments came during a quesion-and-answer session after Bush finished a folksy address on leadership by telling the audience how deeply hurt he feels when his presidential son is criticized.

Bush 41 was joined at the summit by Gerhard Schroder, the failed and Former Chancellor of Germany.