While Speaker-elect Nancy Pelosi (D-CA) was telling reporters that she feels it is “sad” that President Bush continues to blame Iraqi insurgent violence on al Qaeda… They were releasing a video!! 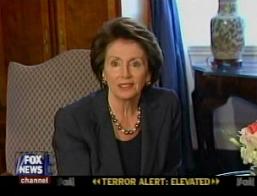 HotAir has Pelosi’s latest admission that she doesn’t know what the heck is going on.

Al Qaeda in Iraq put out a statement today that Pope Benedict is on an Anti-Islamic crusade with his current visit to Turkey!
ADN Kronos reports:

In a statement published Wednesday on the internet, the ‘Islamic Iraqi state’ – a name used by the organization of al-Qaeda in Iraq – said the ongoing visit to Turkey of Pope Benedict XVI was a first step in the Christian offensive against Islam. “This visit of the pope has the aim of preparing a Crusade against Muslim countries following the failure of Crusade heads such as (US president George W.) Bush, (British premier Tony) Blair, (former Italian premier Silvio) Berlusconi and (Australia’s prime minister John) Howard to estinguish the flame of Islam lit by Muslim brothers in Turkey,” said the statement.

According to the terror group founded by the late leader of al-Qaeda in Iraq Abu Musab al-Zarqawi, the pope’s trip is aimed at “cancelling Islamic tradition and cutting Islamic roots … to send them (Turkey) into the arms of the European Union and stop the Islamic wave.”

Just as a helpful tip to the elected Speaker…
Al Zarqawi, the former leader of Al Qaeda in Iraq, was in Iraq before the US was.