A federal judge is ordering Sisayehiticha Dinssa, 34, from Dallas, to remain locked up in Michigan. He was arrested last week in Detroit while traveling to Phoenix with suspicious information on suitcase bombs and nuclear plants. The unemployed Dinssa was also carrying over $78,000 in his suitcase.

A federal judge had to overturn a lower ruling Monday to keep Dinssa locked up. 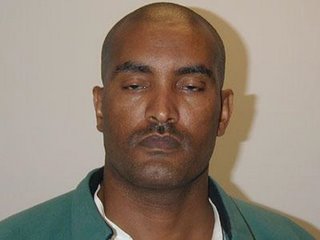 He is charged with currency smuggling after telling Customs agents he was only carrying about $18,000 before a search of his luggage turned up nearly $80,000.

Though he faces no terrorism charges to date, Assistant U.S. Attorney Leonid Feller told Borman that evidence found in Dinssa’s luggage and inside his laptop computer makes him a potential threat to national security.

Agents found articles about nuclear plants, suitcase bombs and a hard-copy commemorative edition of the Dallas Morning News from Sept. 11, 2002 — the one-year anniversary of the terrorist attacks on the World Trade Center and Pentagon, Feller said.

Agents also found a hand-written note saying: “This community is angry. Something is going to happen. We are going to see justice. This is a powder keg waiting to go off.”

Dinssa was carrying information beyond what what someone would normally download from the internet:

Customs officers also discovered that Dinssa was in possession of a laptop computer for which he had no power source. During an initial look at the computer, “Inspectors discovered some files that had been downloaded with information about cyanide and nuclear materials,” an affidavit from an ICE agent filed in the U.S. District Court in Detroit noted.

According to two senior U.S. government officials briefed on the matter, the files appear to be beyond what someone would normally download from the Internet.

Gina Cobb has thoughts on a judge who would release a nut with suitcase bomb instructions.

Previously:
Man Busted in Detroit with $79,000 and Nuke Info on Computer