Just like he did in 2002, 2003, 2005, Representative Charles Rangel today says he will introduce legislation to reinstate the draft! 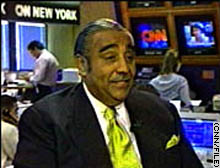 Well, democrats did fearmonger that the Republicans would reintroduce a draft back in 2004, after all.

An influential Democratic lawmaker on Sunday called for reinstatement of the draft as a way to boost U.S. troop levels and draw a broader section of the population into the military or public service.

U.S. Rep. Charles Rangel, the incoming chairman of the House of Representatives’ tax-writing committee, said he would introduce legislation to reinstate the draft as soon as the new, Democratic-controlled Congress convenes in January.

Asked on CBS’ “Face the Nation” if he was still serious about the proposal for a universal draft he raised a couple of years ago, he said, “You bet your life. Underscore serious.”

“If we’re going to challenge Iran and challenge North Korea and then, as some people have asked, to send more troops to Iraq, we can’t do that without a draft,” he said.

Rangel, who opposed the 2003 invasion of Iraq, also said he did not think the United States would have invaded Iraq if the children of members of Congress were sent to fight. He has said the U.S. fighting force is comprised disproportionately of people from low-income families and minorities.

Rangel called for mandatory military service back in 2002.

Rangel introduced a bill to reinstate the draft back in 2003. Rangel believed a draft would help deter unilateral, preemptive American action against Iraq by raising the political cost of war.

Oh, and here’s a little help for the mainstream news…
About Rangel’s comments that our soldiers are from “low income families”, here’s the truth from Military News:

Military recruits mirror the U.S. population and are solidly middle class, Carr said. He cited a recent Heritage Foundation report that shows most recruits come from middle-class families, rather than poorer or wealthier ones. Patterns in recent years reinforce this trend, showing a slight dip in recruits from lower socioeconomic groups and a slight increase from upper-class groups, Carr said.

Wake Up America has more on Rangel’s latest fearmongering.