Here’s one of today’s dirty democratic tricks…
Democrats put locks and chains on Republican offices in New Jersey!
The Republicans had to have police come and cut them off so they could get into their offices this morning. (FOX News)

“It appears the Democrats have already resorted to Election Day dirty tricks,” said Kean campaign manager Evan Kozlow, who said the “desperate ploys” will not prevent the campaign “from informing voters that Bob Menendez is under federal criminal investigation and is unfit to serve in the United States Senate.”

Officials for Sen. Bob Menendez, who is seeking re-election after being appointed by Democratic Gov. Jon Corzine last year, denied his camp was involved with the vandalism.

“Desperate candidates will do desperate things,” Menendez campaign staffer Brian Fallon told FOX News of Kean’s allegations. “We obviously had nothing to do with it.”

Meanwhile…
Joe Piscopo to the rescue! 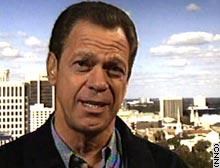 Senatorial Candidate Tom Kean Jr. got some help from comedian Joe Piscopo, a democrat, this week:

When state Sen. Tom Kean Jr. took time out from Election Day campaigning to call the “Jersey Guys” show on 101.5 FM radio Tuesday, host Craig Carton asked him why he was having comedian Joe Piscopo call everybody on his behalf.

Kean said he didn’t have anything to do with it. Later, Piscopo called in and confirmed that.

Piscopo said he was irked that Sen. Bob Menendez didn’t support Samuel Alito Jr. for the U.S. Supreme Court and that Alito is Italian and from Jersey.

“This is my way of protesting,” said Piscopo, who said he is a Democrat
like Menendez.

Alito was born in Trenton.

And, The Anchoress sends this on more dirty tricks in New Jersey:

The US Attorney’s office in Newark has sent monitors to two locations following a complaint from the Republican State Commitee that some voters went into the voting booth and discovered that Democratic candidates had been pre-selected on the machine. The complaints involve Patterson, Old Bridge, Scotts Plains and Camden. Civil Rights prosecutors have gathered affidavits from some voters who claim this occurred and now those officials are trying to replicate the problem. The DOJ is not identifying which locations the monitors are visiting.

Michelle Malkin has been following this years election problems and “attacks” all day.