Is this really surprising?

Omukunde and four other defendents left the Democratic Party headquarters at about 3 a.m. on Nov. 2, 2004 and returned about 20 minutes later, extremely excited and talking about how they had slashed the tires. Omukunde was one of five paid Kerry campaign workers in Milwaukee who allegedly slashed the tires of 20 vans that had been rented by Wisconsin Republicans He was later booked for the crime.

This year Omukunde was given more responsibility for his previous experience in democratic politics. 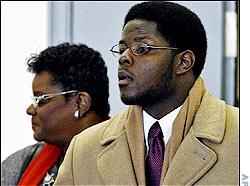 U.S. Rep. Gwen Moore walks into court with her son Sowande Omokunde, who is charged with slashing the tires of vans rented by Republicans. (Court TV)

Rep. Gwen Moore awards her son for his previous political work as a consultant in this year’s election:

Not only does the Milwaukee Democrat have her sister Brenda on the campaign payroll to the tune of nearly $40,000 annually, as we reported last year, but Moore now has brought on her 27-year-old son, Sowande Omokunde, also known as Supreme Solar Allah.

Recent campaign reports show Moore, who was easily re-elected to a second term, paid her son $1,500 in October for political consulting. Omokunde told others that he was the campaign’s deputy field director.

Neither the congresswoman nor her sister returned calls Friday.

As you may recall, Omokunde was one of four Democratic staffers who pleaded guilty to misdemeanors for slashing tires on 25 vans hours before Republican Party officials were to use them to drive voters to the polls on election day 2004. In April, Omokunde was sentenced to four months in jail and fined $1,000 for his role in the much-publicized caper.

But he obviously had a soft landing. How many other criminals can walk out of jail and into a job on a congressional campaign payroll?

Michelle Malkin has more on Omokunde’s arrest and jail time.