Egyptian Sandmonkey reports that the Sexual Harassment protesters were harassed in Cairo during their protest on Wednesday.
The protesters were round up and beaten by the Egyptian police.

Sandmonkey has links to the protest pictures.

Meanwhile, Malaysian police were caught on film abusing a woman in custudy back in 2005. The abuse was filmed with a cell phone and was later posted on the internet and YouTube. The incident caused an uproar in Malaysia and required authorities to introduce legislation to ban the practice of forcing detainees to strip naked and squat. The authorities say the practice is a violation of human rights and unacceptable under Islam.

The abuse by the Malaysian police is out on the internet and really only shows the woman doing squats from her back up. I took the video down after a request from another blogger… 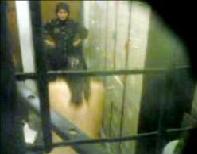 The most gruesome and violent scene that is circulating the internet is the sexual abuse of a male prisoner in Egypt.

WARNING- This is very disturbing so I am linking to the link of the video at Arabawy.