Maj. Gen. William B. Caldwell IV the Spokesman for the Multi-National Forces in Iraq announced today:

The daily casualty count averaged significantly below the average that was in October and well below the six-month average. The security force casualties alone decreased by 21 percent over the past four weeks, and were the lowest level in almost 25 weeks. In Baghdad, there was a 22 percent drop in casualties related to sectarian violence and executions. 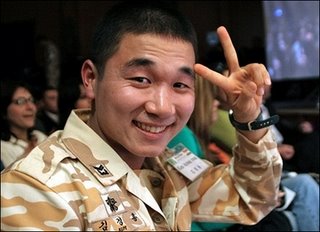 A South Korean soldier shows the victory sign during a ceremony to celebrate the end of the South Korean 11th brigade service in the northern city of Arbil on 27 November 2006. The South Korean government approved a plan to halve the size of its troop deployment in Iraq but to extend the mission for another year, officials said.(AFP/File/Safin Hamed)