“One lessen is… We’ll succeed unless we quit.”

But, on the other side of the Pacific House Speaker Nancy Pelosi made it clear that her “highest priority is to quit!”

President Bush said this during his press conference today in Vietnam.
This photo from his visit will get some reaction.

President Bush sits under a huge bust of Ho Chi Minh, the Vietnamese communist leader who seized power, created an authoritarian communist government, plunged Vietnam into a brutal war that wrecked the country and established economic policies that obliterated the Vietnamese economy. 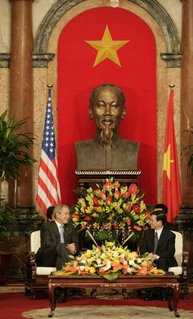 President George W. Bush and Viet President Nguyen Minh Triet meet in the Great Hall of the Presidential Palace in Hanoi Friday, Nov. 17, 2006. President Bush told his host, “I’ve been reading and studying about your country and I have seen now firsthand the great vibrancy and the excitement that’s taking place in Vietnam.” (White House photo by Eric Draper)

Bush added this after his lunch with Prime Minister Howard from Australia today:

“We tend to want there to be instant success in the world, and the task in Iraq is going to take a while.”

Like Iraq, Vietnam was a war where America did not lose a battle on the field. The Vietnam war was lost. Iraq is still up in the air but not if Speaker Pelosi and the Left can help it.

Despite the continual drumbeat by the liberal media, Iraq is no Vietnam… 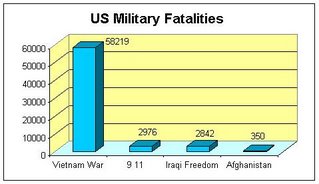 And, today the most liberal Speaker of the House in history confirmed at the Huffington Post that:

Like Bush said, “Well Succeed unless we retreat”… It looks like the real battle ahead will be fought right here at home once again.

Jules Crittenden has the secret to the media’s agenda.

Update: Sadly, this retreat by the liberals will limit the opportunities for democracy in the Middle East. Kiss Democracy goodbye.