The threat of an attack by al-Qaida-linked terrorists has increased sharply in advance of President Bush’s Indonesian stop on Monday.

More than just your average Bush-haters, these Indonesian protesters include the Jewish Star of David on their posters this week. 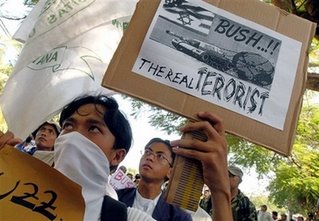 Indonesian students hold signs as they protest against the upcoming visit of U.S President George W. Bush, in front of U.S. consulate in Denpasar, Bali, Indonesia, Friday, Nov. 17, 2006. Bush will pass through the world’s most populous Muslim nation for several hours Monday to hold brief but wide-ranging talks with President Susilo Bambang Yudhoyono, with the Middle East crisis high on the agenda. (AP Photo/Firdia Lisnawati)

The Indonesian government could not rule out terrorism, two days before President Bush visits the island nation:

Acts of terrorism during U.S. President George W. Bush’s visit on November 20 are possible because Islamic militants remain at large, the chief of Indonesia’s intelligence agency said on Saturday.

Bush will stop in the world’s most populous Muslim country for a few hours on Monday to meet President Susilo Bambang Yudhoyono, a regional ally in the U.S.-led war on terrorism.

Indonesia has arrested hundreds of suspected militants since a bombing on the resort island of Bali killed 202 people four years ago.

“As long as all of Noordin Top’s group have not been captured of course the threat is still present, but whether it is big or small we are still calculating,” intelligence chief Syamsir Siregar told reporters, referring to one of the best-known fugitives.

Intelligence officials and police have said Malaysian national Top was a key planner behind the Bali blasts and other attacks aimed at Western-linked targets in Indonesia.

Siregar was speaking after a news conference with other security officials, who declined to spell out how many police and soldiers would be on hand on Monday in Bogor, the site of Bush’s visit.

Local media have reported numbers ranging close to 20,000, and much of Bogor — a scenic town 50 km (30 miles) south of Jakarta in foothills of volcanic peaks — is expected to be locked down for the visit.

Supporters of Khilafah, or the caliphate, rally in Indonesia this week. 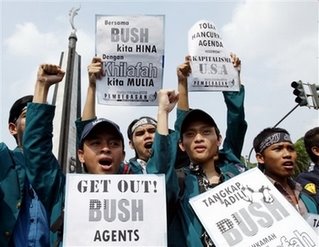 Indonesian Muslim students protest against an upcoming visit to Indonesia by U.S. President George W. Bush. Saturday, Nov 18, 2006, in Bogor, Indonesia. Indonesia has said it will deploy 18,000 police during Bush’s visit to secure the area and to prevent demonstrators who have vowed to come out in full force from disrupting the meetings.(AP Photo/Achmad Ibrahim)

Khilafah.com is the official website of the radical Islamist group Hizb ut-Tahrir (this site may have moved).

Not just an Indonesian group, Hizb ut-Tahrir members held a protest march past Big Ben in London in December, 2005 (of course the women had their separate protest following the men),
VIDEO HERE 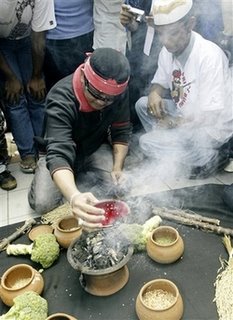 An Indonesian man prepares a ‘black magic’ potion of animal blood and other ingredients near the site of an upcoming visit by U.S. President George W. Bush Thursday, Nov. 16, 2006 in Bogor, Indonesia. (AP)

The Anchoress has more on this renowned black magic practitioner.

Previously:
Khilafah- Coming Soon to a Town Near You