Amazing!
It was the largest protest in Venezuelan history! 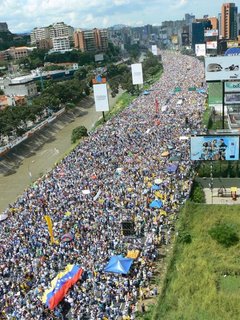 V-Crisis has the story and more photos from the demonstration today in Caracas.
(Hat Tip Instapundit)

Venezuela News and Views has video!

Wow! Daniel now has photos from the massive march estimated at 1.4 million!

That would mean, since Chavez blocked the roads going into the city, that 1 of every 3 or 4 in Caracas made it to the protest! 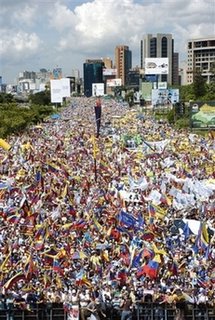 Chavez blocked the roads into the city but it did not affect the turnout! 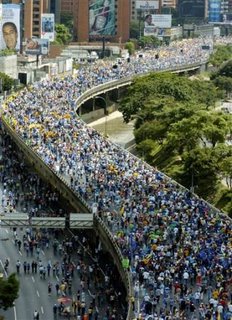 Supporters of the Venezuelan opposition leader Manuel Rosales march through the capital during a campaign rally in Caracas, Venezuela, Saturday. (Yahoo)

Meanwhile, it looks like Zogby International has released another very bogus poll on the presidential election.

Zogby admits to using the “face to face” methodology for their interviews like they did in October. V-Crisis explains why this does not work in Venezuela:

Zogby admits that the poll was conducted with “face to face interviews in home” where, of course, Venezuelans know they are identified by name and can be punished if they say the wrong thing about Chavez, who is handing out about Bs 1 million per person per month as the election nears. This explains why Zogby’s poll found only 8% who voted against Chavez in the 2002 election, when in fact 38% did – a 30% error. If that error were balanced against the presidential vote question, the Zogby poll would show Rosales defeating Chavez — but Zogby conveniently decided to ignore it.