The 30 member block of Muqtada al-Sadr representatives say they will walk out of (the 270 member) Parliament if al-Maliki meets with President Bush this week.

Withdrawing his 30 representatives and 6 cabinet ministers would hurt Maliki’s party and could cause a collapse of the government! 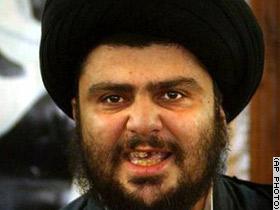 The radical cleric is blaming the US for the attacks in Sadr City this week that killed over 200 Iraqis:

Supporters of Shiite cleric Muqtada al-Sadr warned they will suspend their membership in parliament and the Cabinet if Prime Minister Nouri al-Maliki meets U.S. President George W. Bush in Jordan next week, a member of parliament said. Bush and al-Maliki were scheduled to meet Wednesday and Thursday in Amman.

“If the security situation and services don’t improve, and if Mr. prime minister does not cancel his meeting with Bush the criminal in Jordan, we will suspend our membership at the Council of Deputies (parliament) and government,” Qusai Abdul-Wahab, an al-Sadr follower, told the AP.

Al-Sadr also blamed Al Qaeda and Saddam Hussein loyalists for the attacks this past week:

Sadr, who on Thursday blamed Sunni Islamist Al Qaeda militants and Saddam Hussein loyalists for the blasts which killed 202 people, made the call during a Friday sermon in Kufa, just outside the Shia holy city of Najaf, south of Baghdad.

It was directed at Harith Al Dari, the head of Iraq’s influential Muslim Clerics Association, an umbrella group for Sunni religious leaders, who is wanted by Iraqi authorities on suspicion of links to terrorism charges. Dari, who lives abroad, denies the accusations.

Sadr said Dari must issue religious rulings, or fatwas, to fellow minority Sunnis, who form the backbone of a three-year- old insurgency, forbidding the killing of Shias or membership of Al Qaeda.

“He has to release a fatwa prohibiting the killing of Shias so as to preserve Muslim blood and must prohibit membership of Al Qaeda or any other organisation that has made (Shias) their enemies,” he told chanting supporters.

Al Sadr is also thought to be behind the kidnapping of four American security contractors near Basra.