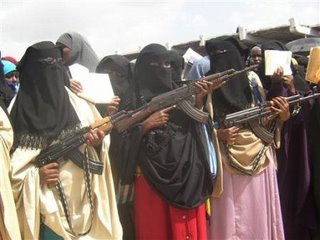 A witnesses said many people were wounded.

“Three cars have arrived at government checkpoint and as the police tried to check them, they exploded,” Deputy Defense Minister Salad Ali Jelle told The Associated Press.

“The three drivers were killed on the spot and three others who were with them,” the minister said by telephone. “We have captured three who were with them who have tried to flee. The dead include non-Somalis, they are al-Qaida supporters.”

No one has claimed responsibility for the attack.

It was not the first suicide attack in Somalia.
On September 18, 2006, two suicide bombers attempted to assassinate Somalian President Abdullahi Yusuf Ahmed in the south central town of Baidoa when they blew up their cars. 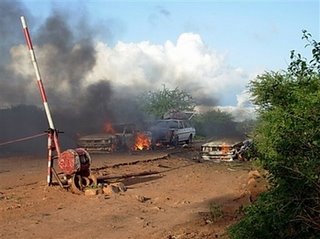 Cars burn after a bomb exploded at a check point in Baidoa, Somalia, Thursday, Nov. 30, 2006. Three suicide car bombers, among them a veiled woman, killed themselves and three companions at a police checkpoint outside Somalia’s government base of Baidoa killing, a senior official and a police officer said Thursday. (AP Photo)

Dr. Rusty Shackleford reported yesterday that the head of the “Foreign Relations Department” of the Islamic Courts in Somalia is an American, Ibrahim Hassan Addow.