Kenneth R. Timmerman believes he knows the reason behind the latest letter from Ahmadinejad.
Via LGF:

Dump Bush, allow the Muslims to destroy Israel, and adopt Islam — or else you will be destroyed. This is Ahmadinejad’s message.

The letter: “A Message of H.E. Dr. Mahmoud Ahmadinejad President of the Islamic Republic of Iran To the American People” is posted at the UN Iranian mission website.

HERE is the entire letter.

Ahmadinejad reaches out to the democrats in his latest letter to America. He also urges the US to leave Iraq and blasts the evil Zionist regime. 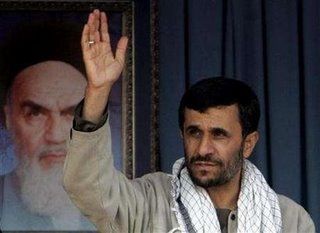 Iranian President Mahmoud Ahmadinejad is seen November 26, 2006. Ahmadinejad, in a letter to the American people on Wednesday, accused their government of ‘coercion, force and injustice’ and urged the United States to pull out of Iraq. (REUTERS/Raheb Homavandi)

Iranian President Mahmoud Ahmadinejad sent a 5 page letter to the US and democratic party to reject the Bush Administration today:

In a letter to “Noble Americans” Iran’s president said the US administration’s use of “coercion, force and injustice” weakened its global position.

Mr Ahmadinejad said terrorism had “grown exponentially” in the “military misadventure” of Iraq.

The Iranian leader said he sought to start a dialogue with the American people.

His five-page letter urged Washington to recognise a Palestinian state, saying it was ignoring public opinion in “trampling the rights of the Palestinian people”.

He also warned the Democratic Party that, after gaining control of Congress, they would be “held to account by the people and by history.”

It shouldn’t be hard for the mullacracy to work with the democrats since Ahmadinejad and the new American majority believe in many of the same things.

In the name of God, the Compassionate, the Merciful,

And if we did not share a common responsibility to promote and protect freedom and human dignity and integrity;

Then, there would have been little urgency to have a dialogue with you.

Both our nations are God-fearing, truth-loving and justice-seeking, and both seek dignity, respect and perfection…

We all deplore injustice, the trampling of peoples’ rights and the intimidation and humiliation of human beings.

We all detest darkness, deceit, lies and distortion, and seek and admire salvation, enlightenment, sincerity and honesty…

We, like you, are aggrieved by the ever-worsening pain and misery of the Palestinian people. Persistent aggressions by the Zionists are making life more and more difficult for the rightful owners of the land of Palestine . In broad day-light, in front of cameras and before the eyes of the world, they are bombarding innocent defenseless civilians, bulldozing houses, firing machine guns at students in the streets and alleys, and subjecting their families to endless grief.

No day goes by without a new crime.

Palestinian mothers, just like Iranian and American mothers, love their children, and are painfully bereaved by the imprisonment, wounding and murder of their children. What mother wouldn’t?

For 60 years, the Zionist regime has driven millions of the inhabitants of Palestine out of their homes. Many of these refugees have died in the Diaspora and in refugee camps. Their children have spent their youth in these camps and are aging while still in the hope of returning to homeland.

You know well that the US administration has persistently provided blind and blanket support to the Zionist regime, has emboldened it to continue its crimes, and has prevented the UN Security Council from condemning it…

In Iraq , about one hundred and fifty thousand American soldiers, separated from their families and loved ones, are operating under the command of the current US administration. A substantial number of them have been killed or wounded and their presence in Iraq has tarnished the image of the American people and government.

Their mothers and relatives have, on numerous occasions, displayed their discontent with the presence of their sons and daughters in a land thousands of miles away from US shores. American soldiers often wonder why they have been sent to Iraq .

The legitimacy, power and influence of a government do not emanate from its arsenals of tanks, fighter aircrafts, missiles or nuclear weapons. Legitimacy and influence reside in sound logic, quest for justice and compassion and empathy for all humanity. The global position of the United States is in all probability weakened because the administration has continued to resort to force, to conceal the truth, and to mislead the American people about its policies and practices…

We all condemn terrorism, because its victims are the innocent…

What have the Zionists done for the American people that the US administration considers itself obliged to blindly support these infamous aggressors? Is it not because they have imposed themselves on a substantial portion of the banking, financial, cultural and media sectors?

You’ll have to read the rest- HERE
It is interesting that the Iranian Leader who is wanting to wipe Israel off the map, denies the Holocaust, and thrashes womens rights protesters, talks so much about “trampling of peoples’ rights and the intimidation and humiliation of human beings.”