Ahmadinejad called on Mideast nations to expel the “enemies who are against humanity from our countries and our sacred lands.”
Is this the help the US is wanting? 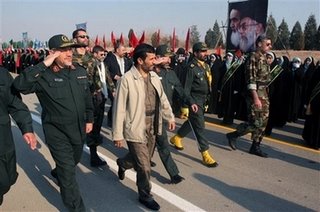 Ahmadinejad announced yesterday that Iran would help the US in Iraq if the US got out of Iraq. He also said the days of the US are numbered.
Bloomberg reported:

Iranian President Mahmoud Ahmadinejad predicted the collapse of Israel, the U.S. and Britain, attacking what he called their “oppressive behavior.”

“The Zionist regime is on a steep downhill towards collapse and disgrace,” Ahmandinejad told supporters at a rally of Basiji militia forces near Tehran today. In a reference to the U.S. and U.K., he said “the collapse and crumbling of your devilish rule has started.” The speech was carried live on state television.

Iran doesn’t recognize Israel, and Ahmadinejad drew international condemnation after saying in October 2005 that Israel should be “wiped off the map.”

Ahmadinejad also called out to his Mideast neighbors to help expel the occupiers:

“The Iraqi, Lebanese, Afghan and Palestinian people must be helped. By helping each other, we can expel the occupiers,” Ahmadinejad said in a speech to the Islamic volunteer Basij militia, broadcast on state television.

Teheran had repeatedly called for the withdrawal of US forces from its neighbours Iraq and Afghanistan.

“Just look at Iraq,” Ahmadinejad said in the speech near the shrine of the Islamic republic’s founder, the late Ayatollah Khomeini. “Since the corrupt foreigners arrived in Iraq, there has been nothing but corruption and death.”

He said “the Satanic dominance of the United States is fading” and that “the Zionist regime, which is a tool in the hands of the oppressors, is on the slope of destruction.”

He certainly sounds like a rational leader you’d want to sit and reason with. Huh?

Let Freedom Ring like The New Editor sees the new “Realism” for what it is.

If we talk to Iran, as is being sold by every political huckster in the MSM, this will be a devastating defeat for America. And Bush should not be forgiven for sacrificing so many American lives to turn Iraq over to our enemies. It will be worse than Clinton’s Mogadishu moment, far worse and with more profound long-term consequences for our military and national psyche.

Jules Crittenden sees this moment as Maliki’s opportunity… like the last moment that was just missed.

BizzyBlog is wondering why this news is not being reported?