The centrifuges could make more than 44 pounds of weapons grade uranium each month. 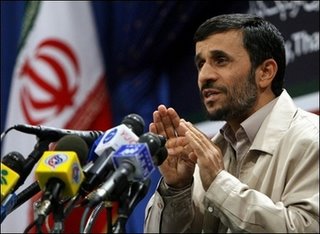 Iran’s President Mahmoud Ahmadinejad greets the Iranian media before starting a news conference in Tehran. Ahamdinejad has defiantly announced the ultimate aim of Iran’s atomic drive was to install tens of thousands of uranium-enriching centrifuges to produce nuclear fuel.(AFP)

Despite the threat of UN sanctions over Tehran’s refusal to hold back its nuclear programme, Ahmadinejad said that the long-term target of Iran should be to install 60,000 centrifuges to enrich uranium.

Iran has said it is looking to install 3,000 centrifuges by March 2007, in itself a massive step from the two cascades of 164 centrifuges apiece it has currently at its Natanz plant to enrich uranium on a research scale.

“We want to produce nuclear fuel and eventually we should go for 60,000 centrifuges. We should continue along this path. We are at the beginning of the wave,” Ahmadinejad told a news conference Tuesday.

Experts say that 50,000 centrifuges would normally be sufficient to produce 20 kilos (44 pounds) of weapons grade uranium in under a month, but Iran vehemently denies it wants the bomb.

Also, today International Atomic Energy Officials announced that they found traces of unexplained plutonium and highly enriched uranium at a nuclear waste facility in Iran. The IAEA also said it could not confirm Iranian claims that its nuclear activities were exclusively nonmilitary unless Tehran increased its openness.
(Via LGF)

Ahmadinejad also said that Iran is ready to talk with the US once it changes it’s attitudes.