This is video taken from another violent and massive land protest on November 8, 2006 in Sanzhou, China- HERE 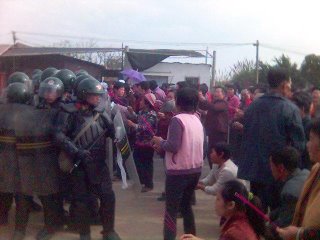 During last year’s land reform protest in Dongshou Village in southern China, several people were killed when troops opened fire on the defenseless villagers. This picture shows villagers begging the officials to release the bodies of their family members who were killed by the troops. (Zonaeuropa)

Residents in the city of Dongzhou in southern Guangdong province are reported to have taken eight local officials hostage!
The Epoch Times reports:

Angry residents of Dongzhou in the southern province of Guangdong had held the officials near the village for nearly a week, demanding the release of a detained local activist, Radio Free Asia reported.

The villagers were protesting at the detention on Nov. 9 of Chen Jian, a resident who had hung anti-corruption slogans outside his house, it said.

Three residents contacted by Reuters also said there had been a standoff with officials and that police and anti-riot troops had gathered on the edge of the village.

“The villagers grabbed eight government officials and have kept them locked in the temple for seven days,” said one shopkeeper in Dongzhou. “The villagers have locked the gate.” 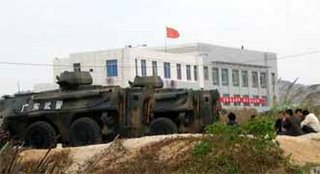 Many of the villagers are afraid there will be a blood bath like last year in Dongzhou when government soldiers opened fire on the villagers:

Dongzhou gained notoriety in December last year after police and troops fired on locals in a violent standoff over the construction of a coal-fired power station.

Some reports at the time said dozens of protesters and bystandards may have died, but the regime said only three were killed—a number confirmed by residents, including kin of the dead.

Dongzhou again appears to be witnessing one of the thousands of protests and confrontations that the Chinese regime says happen every year.

The number of protests and riots throughout the country fell by over a fifth in the first nine months of 2006, a senior police official said earlier this month. Police dealt with 17,900 “mass incidents” from January to September—a fall of 22.1 percent on the same period last year.