A "60 Mile Trench Around Baghdad" Should Have Been a Clue

* I’ve updated this post. Thanks to Democracy Project. *
** AllahPundit has a whole post up in response to my earlier thoughts that the “60 mile trench” report originated from Brig. Gen. Abdul-Karim Khalaf, who was on the original list of questionable Iraqi sources but has since been removed. I disagree with AllahPundit though, in the definition of a “60 mile trench”. (You’ll have to read the post at HotAir to get that… A “60 mile trench” is not a “series of checkpoints” no matter who’s translating.)

This very strange report was published by the New York Times and Associated Press on September 15, 2006:

Iraqi officials plan to dig a series of trenches around Baghdad in the coming weeks to seal it off and control movement into and out of the city, The New York Times reported on Saturday. 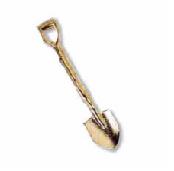 “We’re going to build a trench around Baghdad” — a distance measuring about 60 miles — “so we can control the exits and entrances so people will be searched properly,” Brig.-Gen. Abdul Karim Khalaf told the Times on Friday in an interview.

This week it was discovered that there are several sources and reports from Iraq that are not accurate and not true. (This news item was reported to the AP by Brig. Gen. Abdul-Karim Khalaf and was refuted by the MNF-Iraq the next day.)

This “60 mile trench” story is a great example…

You would think that a story about digging a “60 mile trench” would have been a clue to the AP that their source was a bit off… Sadly, it was not.

The 60 mile trench article was republished by hundreds of news organizations:

The plan to dig trenches around Baghdad will be implemented in coming weeks, Interior Ministry spokesman Brig. Abdul-Kareem Khalaf told The Associated Press.

The plan to dig trenches around Baghdad will be implemented in coming weeks, Interior Ministry spokesman Brig. Abdul-Kareem Khalaf told The Associated Press.

You get the picture!…

The “60 mile trench article” was reprinted hundreds of times.

Hat’s off to the the Boston Globe for making the following correction a day later on September 16, 2006:

The U.S. military denied reports on Saturday that Iraq plans to dig a giant ring of trenches around the city of Baghdad.

Iraq’s Interior Ministry announced earlier this week that it plans to set up 28 checkpoints that would allow controlled access to the city, while closing off other roads as part of a security crackdown.

The New York Times quoted an Interior Ministry spokesman on Saturday as saying the Iraqis would also dig a giant trench around the city of seven million people.

“We’re going to build a trench around Baghdad so we can control the exits and entrances so people will be searched properly,” Brigadier General Abdul Karim Khalaf told the newspaper. He said the trench would run across farmland and other open areas.

Maybe we should send the AP a shovel?

Democracy Project has more on the “Rancid News”

Jules Crittenden reports on the possible capture of the notorious and deadly Juba the Sniper… Not to be confused with the notorious but ineffective Juma the Hermaphrodite.