No news on the status of anti-Iranian Regime Ayatollah Kazemeini-Boroujerdi.

It is feared he is dead! 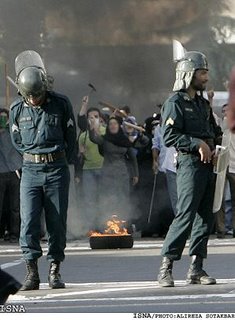 Outside the cleric’s home in October before his arrest his followers kept police a away for hours, Via The Spirit of Man, ADVAR and ISNA

Iran Press is reporting on the deaths during the arrest of Ayatollah Kazemeini-Boroujerdi, an anti-Iranian regime cleric:

Kazemeini-Boroujerdi who had been arrested and imprisoned in 1995 and 2000 for his vehement opposition to the Islamic regime was re-arrested on October 8th after a 24 hour stand-off and clashes between his supporters and regime’s guards. His supporters were also, ultimately arrested and taken away to unknown locations; rumors that were later confirmed indicated that the detainees were all taken to the infamous ward 209 of Evin prison which is controlled and overseen by agents of the ministry of intelligence and security. Three days after the mass arrests, one of these supporters lost his life under the pressure of torture and interrogation.

Eyewitnesses indicated that upwards of 600 people were arrested and approximately 200 were killed during the clashes. Regime sources however, have unofficially admitted to only killing 20 of Kazemini-Boroujerdi’s supporters during the clashes with security guards. 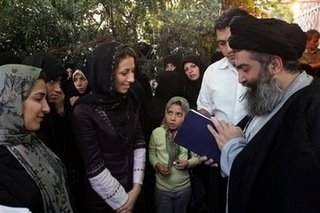 Iranian cleric Hossein Kazemeini Boroujerdi, right, consults with the Quran, as a woman asks for his guidance on a personal issue during a public visit at the courtyard of his house in Tehran, Iran, in this photo dated Friday, Sept. 8, 2006. Police clashed with demonstrators early Saturday Oct. 7, 2006, outside the home of cleric Boroujerdi. (AP)

There are rumors the Iranian cleric is dead!

…The special prosecutor for the clergy and expert team related to the case Ayatollah Kazemeini-Boroujerdi announced that he had “suffered a heart attack” and that he has been hospitalized, however, they failed to mention the name of said hospital. Reportedly prisoners who suffer heart attacks while in detention in ward 209 are transferred to Khatam al-Nabia hospital in Tehran; it is possible that Ayatollah Kazemeini-Boroujerdi also has been transferred to said hospital. However, in recent days, following the inexplicably long holidays for Eid Fetr*, in the city Ghom, rumors of the murder of the cleric has spread;