Last month a noted Pakistani reporter claimed that Adnan G. El Shukrijumah had successfully smuggled nuclear material across the US border and was planning an attack on the United States during the holy month of Ramadan which begins on September 24th and ends on october 23rd. 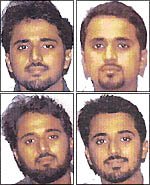 Could this be Al Qaeda’s Ramadan warnings we heard about last month?

Here is the only known video of Adnan G. El Shukrijumah taken from an English language class he was taking in the United States.

A website out of New York is warning Americans of a dirty bomb plot to attack 7 NFL stadiums this weekend.
CBS 13 reports:

The threat, posted Oct. 12, was part of an ongoing Internet conversation titled “New Attack on America Be Afraid.” It mentioned NFL stadiums in New York, Miami, Atlanta, Seattle, Houston, Oakland and Cleveland, where games are scheduled to be held this weekend.

The Homeland Security Department alerted authorities and stadium owners in those cities, as well as the NFL, of the web message but said the threat was being viewed “with strong skepticism.” Homeland Security spokesman Russ Knocke said there was no intelligence that indicated such an attack was imminent, and that the alert was “out of an abundance of caution.”

“The department strongly encourages the public to continue to go about their plans, including attending events that involve large public gatherings such as football games,” Knocke said.

The FBI also expressed doubt about the threat.

Hamid Mir, the famed Pakistani journalist who obtained the only post-9/11 interviews with Osama bin Laden and Ayman al-Zawahiri, is the journalist who reported this news last month. 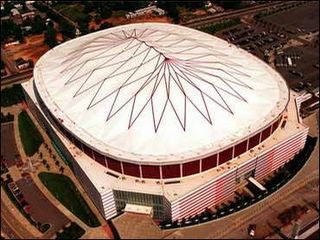 The Georgia Dome, Home of the Falcons, is one of the seven NFL stadiums being targeted.

Also… Today we find out that Al Qaeda is learning from our news leaks!

Dr. Rusty Shackleford has found the original stadium threats from a few weeks ago.
In the Bullpen has more on the threats.

Update: The FBI interviewed a 20 year old Milwaukee man on Thursday. Also- “Authorities traced the site’s Internet provider to Voxel Dot Net Inc., which has support and engineering staff based in Troy, N.Y.”