Ahmed Qusai al-Taei was dragged away by the Mahdi Army while visiting his in-laws in Baghdad last Monday. 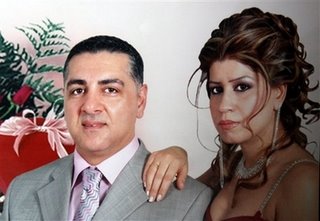 Undated picture released by family of Ahmed Qusai al-Taei, a U.S. Army translator kidnapped last week in Baghdad , and his wife Israa Abdul-Satar , in Baghdad, Iraq, Monday Oct. 30, 2006. The U.S. military has said the soldier was of Iraqi descent and that he was visiting family in the central Baghdad neighborhood of Karradah when he was abducted. (AP Photo )

An Arab TV station identified the missing US translator in Baghdad as Ahmed Qusai al-Taei on Friday:

U.S. troops are still searching for an American soldier who was abducted on Monday. And today, an Arab TV station identifies the soldier as Ahmed Qusai al-Taei.

U.S. officials have not identified the soldier to protect his family members in Iraq, and they’re not immediately confirming the reported name.

The TV station says he was born in Iraq, and that his mother is appealing to the kidnappers to show him mercy as a fellow Muslim.

American military officials say the soldier left without authorization to visit relatives in Baghdad. Witnesses say he was at their house when three cars pulled up and the men inside forced him into one. The military says it’s detained several people in connection with the kidnapping.

Members of the Mahdi Army dragged Ahmed Qusai al-Taei away in a car last Monday in front of the his new in-laws:

A U.S. Army translator missing after being kidnapped in Iraq had broken military rules to marry an Iraqi woman and was visiting her when he was abducted, according to people who claim to be relatives of the wife.

According to a report in Monday editions of The New York Times, the relatives said that the soldier, previously unidentified by the U.S. government, is Ahmed Qusai al-Taei, a 41-year-old Iraqi-American. The family did not know he was a soldier until after the kidnapping, the relatives said.

The relatives said members of the Shiite Mahdi Army militia came to the wife’s home on Oct. 23 and dragged Taei into their car.

“They were saying, ‘He’s an American journalist,'” said a woman who claimed she was the soldier’s mother-in-law and asked that she be identified only by her nickname, Um Omar, because of fear of reprisals. “We were saying, ‘No, he’s an Iraqi.'”

Ahmed Abdul-Satar, who said he was the soldier’s brother-in-law, recounted a frantic scene from the kidnapping, with the women of the family screaming and begging the gunmen not to take Taei.

Michelle Malkin reported on the soldier’s abduction last week. The initial reports then were very sketchy. This clears things some.