It looks like the Daily Kos mob is heading to another perfect season… and a lifetime record of 0 and 20 something! 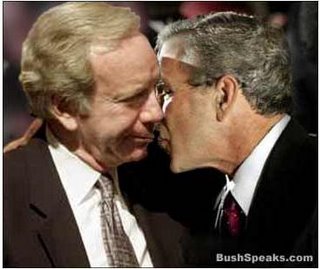 Joe and George – The lonely moderate may get the last laugh.

** Did the nutjobs concede Connecticut?… (Isn’t that like their only official race this year?)
** Did Lamont return to a creampuff and koolaid campaign?

The bewildered Far-Left senatorial candidate from Connecticut, Ned Lamont, apparently clueless that gas prices have fallen, lamely tried to tie Bush with Lieberman on the current gas prices… which are spiraling downward in case he missed it.
Lamont proposes:

He urged tax credits to help companies to buy new fuel-efficent equipment. He also set a goal for America to use one quarter of its energy from renewable sources by 2025.

Lamont framed energy independence as a national security issue, “so we don’t have to fight and lose loved ones in a desert in Iraq thousands of miles away.”

One day after his first of three debates with Lieberman and Republican Alan Schlesinger, Lamont said he plans to hammer away at issues such as energy independence, Iraq and health care as the race closes.

Getting back to basics (lunacy), Lamont, like the nutty left in this country, can’t seem to shake that “blood for oil” jingle.

It’s interesting how the Left thinks that snapping your fingers or clicking your heals is going to create an abundance of alternative fuels.

It sounds great, but a more practical and realistic goal may be to allow American companies to drill our oil off the coast and in the tundra instead of watching the Chinese and Cubans drilling 70 miles from our shores!
That might make more sense.

Thankfully, it looks like the people of Connecticut aren’t buying the nutty jingles.
And, the nutty Left at Daily Kos is looking to stay a perfect 0 and 20 something.