Update: The vandals were McCaskill volunteers!

Geesh… is this surprising?

You put up your Republican signs…
And, it’s like catching crappie out of Duck Creek.

So, they captured the crime on film and realized it was McCaskill volunteers ripping the signs down!… Nice! 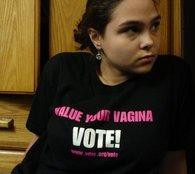 Chris Worth
The photos were gleaned from Facebook, they are Missouri State students Christin Green and Chris Worth.

The young unhinged hoodlums just can’t help themselves.
After their Young Democrats meeting and cocoa at the local coffee hut, the young’uns clear the neighborhood of Jim Talent signs…
Too bad they had the cameras set up.

No wonder, Jim Talent has a special link for you to request more signs!

Arena of Ideas has more on the capture.

The kiddies are caught vandalizing for Claire McCaskill.

And…
Here is audiopost from the Allman and Smash Morning Show at 97.1 FM in St. Louis of a “shaken” Claire whining about those nasty Republicans “questioning her patriotism”?? Who? Name one!

I’d like to see proof of that? Is Claire talking about her cut and run conversation with her buddy Willie Nelson…
before he was caught with the shrooms?

It is surprising that the same person who said Bush was letting people die on rooftoots because they were poor and black is suddenly shaken by a political ad.

The young liberals were also out attacking a guest speaker like animals last night at Columbia University.