The Sudanese Interior Minister is accused of training and supporting the Janjaweed. 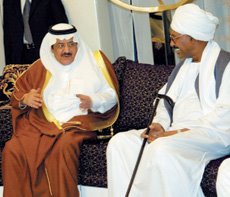 Via Free Thoughts:
According to a former militiaman, the Sudanese government is behind the terrible slaughter of innocents in Darfur:

The Sudanese government is supporting the feared Janjaweed militia, which the United States accuses of genocide against non-Arab ethnic groups in Darfur, the BBC reported on Tuesday.

Citing an interview with a man identified only as ‘Ali’, a former member of the militia who admitted to killing innocent villagers in Darfur, the BBC said that Sudanese soldiers trained Janjaweed militiamen, and that the country’s air force bombed a village before the militia went in to kill villagers.

The people who trained us came from the north, from the government. They gave us orders, and they say that after we are trained, they will give us guns and ammunition. We will be split into two groups — one on horses, one on camels,’ the man told the broadcaster’s evening current affairs programme.

Asked how he knew the men training him were from the government, ‘Ali’ said: ‘They were wearing the uniforms of the military.’

When asked to name the members of the government who were ordering his forces, the man said that one ‘very well known and regular visitor’ was Sudan’s interior minister — Abdul Rahim Hussein.

‘I tell you one fact. The Janjaweed don’t make decisions. The orders always come from the government,’ the man added.

The Janjaweed was formed for ethnic cleansing of the “black slaves” the defector claims.

And now the Janjaweed is moving into southern Chad… 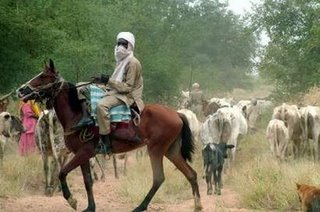 A Chadian ranger flees with his cattle in Koukou Angarana town, some 90 km (55 miles) from Chad’s border with Sudan, October 12, 2006. Sudanese Janjaweed militia and Chadian rebels have attacked at least 10 villages in south-east Chad in the past fortnight, killing over 100 people and displacing more than 3,000, local and U.N. officials say. Picture taken October 12, 2006. (REUTERS/Stephanie Hancock)

USAID has donated $91 million of emergency food aid to Darfur and southern Chad since October 1st.

CLOWN WORLD: Fauci Calls for Testing of All People Coming into the Country -- Except Illegal Border Crossers

January 6 Committee Chairman Bennie Thompson Says if You Exercise Your Constitutional Right by Pleading the 5th, You're Guilty (VIDEO)