The Spirit of Man reported on several protests this morning in Iran.

Students at Amir-Kabir University protested for the release of activist Keyvan Ansari who was arrested three weeks ago and is being held in Evin prison. 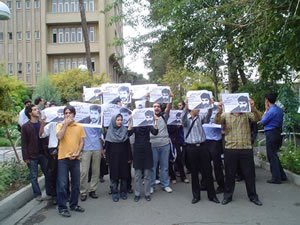 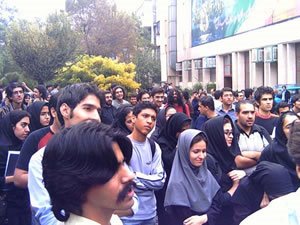 Students at Iran’s Amir-Kabir University protested on campus yesterday against the repression at the school.
Iran Focus reported:

Some 500 students in Tehran’s Amir-Kabir University held a protest on Monday against the takeover of universities by Islamist groups affiliated to the Revolutionary Guards. These include the paramilitary Bassij Daneshjui and Jihad Daneshgahi. They also demanded the release of a fellow student activist.

“Political prisoners must be freed”, students chanted during the hour-long protest on campus.

“The Bassij association [inside universities] must be shut down”, they chanted, as they criticised the atmosphere of repression on campus.

The student protesters called for the release of Keyvan Ansari, a former student leader at Amir-Kabir who is currently languishing in an Iranian jail. Ansari was arrested more than three weeks ago. 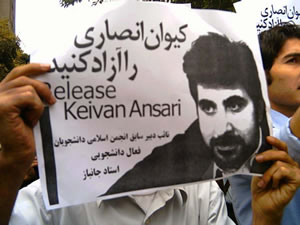 Dr Keyvan Ansari was reportedly arrested on 18 September outside his house. He is a member of the Alumni Association of Iran (Sazman-e Danesh Amukhtegan-e Iran-e Eslami [Advar-e Tahkim-e Vahdat]). He was able to telephone his family some time later and reportedly said that he was being held in solitary confinement in Section 209 of Evin Prison. His family has not yet been allowed to see him.