This is the same organization that threw oreos at him at a previous event.

Michael Steele said that Cardin was all talk and no action during the five minutes that he was given at the podium during the NAACP forum after he arrived uninvited. 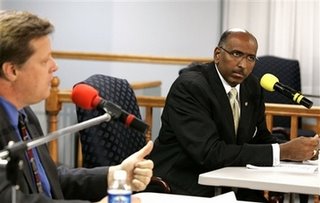 And, Barak Obama stumped for democrat Cardin, yesterday in Maryland.

Powerline has more on this toss-up for Maryland’s senatorial seat.