Remember back in 2004 and 2005 when Spanish Prime Minister Jose Luis Rodriguez Zapatero disinvited the US and instead invited Cuba and Venezuela to the annual military parade?

Well, this year was different, but not much different…
Barcepundit explains Zapatero’s reaction to the Stars and Stripes. 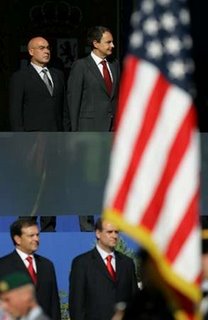