Update: 8 deaths are now being reported.

The worst internal clashes in months broke out in Gaza today…
Hamas radio is blaming Palestinian President Mahmoud Abbas for stoking the unrest. 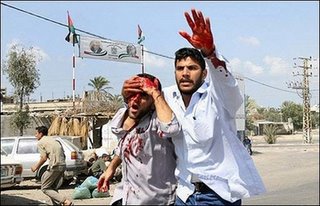 A Palestinian man helps an injured colleague during clashes in the southern Gaza Strip town of Khan Yunis. The West Bank headquarters of the Palestinian government was in flames as rivalry between the governing Islamist Hamas movement and the president’s Fatah faction erupted in deadly violence.(AFP/Said Khatib)

Palestinian Prime Minister Ismail Haniyeh, leader of the Islamic militant group Hamas, called on Palestinians “to be responsible and abandon their differences.”

The clashes stoked fears of civil war as the rival forces, loyal to either Hamas or President Mahmoud Abbas of Fatah, exchanged fire from rooftops near parliament building in Gaza City. Smoke from burning tires wafted overhead as pedestrians ran for cover.

Clashes also broke out in the West Bank. 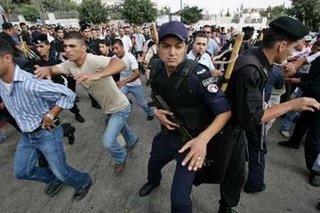 Palestinian Fatah supporters run near the Palestinian Council of Ministers building during a protest against the Hamas government in the West Bank city of Ramallah October 1, 2006. Rival Palestinian security forces clashed across the Gaza Strip on Sunday, killing six and injuring 50 others, in the biggest outbreak of internal fighting in months over unpaid wages and stalled unity government talks. (REUTERS/Loay Abu Haykel) 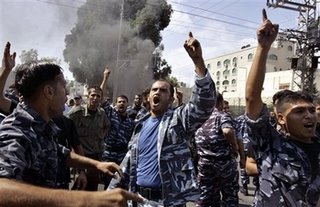 Palestinian policemen loyal to Palestinian President Mahmoud Abbas shout during a protest near the parliament building in Gaza City Sunday Oct. 1, 2006. Later, militiamen from the ruling Hamas party clashed with police members, as they tried to break this and other protests over unpaid government salaries in Gaza City and elsewhere in the Gaza Strip. Two people were killed, including a 15-year-old boy. Hamas Radio accused Abbas of stoking the unrest and dividing the Palestinian people. (AP Photo/Hatem Moussa)

In an official announcement on Saturday, a spokesman for the Al Aqsa Brigades, the armed resistance wing of the Fateh party, called upon resistance members to launch more homemade projectiles at the southern Israeli town of Sderot.

A. Jacksonian is not surprised by these latest developments.