Was this really necessary?

Is this such a rare thing that it should this have made headlines? 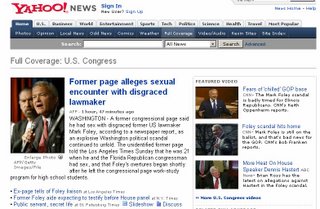 Click to Enlarge
For the media/democrats who promote condom use in grade school should they really be acting so shocked that a “21 year old” had sex?

Are we going to be forced to see every man Foley ever had sex with plastered on the front pages in the next five weeks?

The democrats/media shows their disgust for gays today.

WASHINGTON – (AFP) A former congressional page said he had sex with disgraced former US lawmaker Mark Foley, according to a newspaper report, as an explosive Washington political scandal continued to unfold. The unidentified former page told the Los Angeles Times Sunday that he was 21 when he and the Florida Republican congressman had sex…

This is called “reaching” and it seems to be alive and well in the mainstream news today.