How soon we forget. 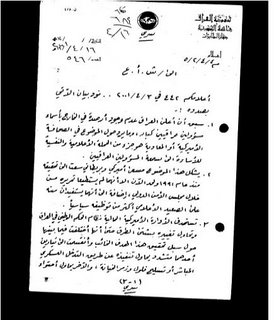 The memo dated March 28, 2001 talks about plans to “Strike US presence and interest” in response to the new policies of President Bush toward Iraq and that aims at toppling the regime”. I am reposting here since this will most likely be missed by the mainstream media:

In the name of God the Most Merciful, the Most Compassionate

The Presidency of the Republic

Mr: The Respectful Assistant Director of the Apparatus Operations.

1. The available signs indicate the intentions of America under the presidency of Bush the Son that aim to damage the political leadership in the country, and among it is their seeking to apply what it called the smart sanctions and it summarize as:

A. Allow the importing of humanitarian goods to Iraq without prior approval and this aim to make the leadership in Iraq responsible for the starvation of the Iraqi people and not the responsibility of the United Nations.

B. The return of the Inspectors.

C. The massing of the World opinion around the special procedures to contain Iraq.

D. Travel prohibition for the Iraqi officials and the freezing of their special accounts.

2. The 10th Directorate suggested the following to encounter what was mentioned above.

A. Prepare a public relation plan that aims to clarify the rights of Iraq, and bring up what is related to the Palestinian cause, and the call to strike the presence and interests of America.

B. Work to commit some nations like France, China, Russia and Japan to economical agreements that make the implementation of the smart sanctions to have negative effect to the interests of these nations.

C. Strengthen our embassies with new remarkable staff that is can go toward new windows in the international relations.

D. Make a list of the citizens including those who are in the Apparatus that have in their names foreign accounts and do the procedures to protect these accounts from any enemy action.

E. Insist that that Iraq money will stay local.

Notice the Presidency of what was mentioned above.

Update: Jeff sends another translation by Jveritas at Free Republic. Document BIAP 2003-000654 proves that not only Saddam Regime supported terrorists organization like Hamas and Al Qaeda as we have learned from other documents but also they were recruiting Suicide Terrorist Bombers to hit US interests!

In the Name of God the Merciful The Compassionate

The Command of Ali Bin Abi Taleb Air Force Base

To all the Units

End of translation of page 6

The Anchoress has more.