The father of Flight 93 hero Todd Beamer is speaking out against Jack “Cold Blooded” Murtha. 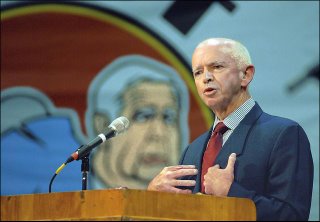 David Beamer, whose son, Todd sounded the rallying cry “Let’s roll” before the crash of United Flight 93 on Sept. 11, speaks Sunday during the “Boot Murtha” rally at the Cambria County War Memorial Arena in Johnstown. (Tribune-Democrat)

** Click on the Flight 93 advertisement on the sidebar to the left to read more about David Beamer.

From the Altoona Mirror:

David Beamer labeled U.S. Rep. John Murtha’s suggestion that America give up the fight in Iraq as “ridiculous” Sunday while attending a rally in Johnstown. Beamer’s son Todd was one of the heroes on Flight 93 that crashed into a field near Shanksville, Somerset County, Sept. 11, 2001.

Todd Beamer, a father of three, was one of the leaders of the revolt and the individual who uttered the now renown words, “Lets roll.”

His father attended a three-hour, “Boot Murtha” rally at the War Memorial Arena Sunday and received a standing ovation when he said he agrees with Murtha on the need for a memorial “but on the most important matters of our day, I could not disagree more with John P. Murtha.”

Beamer lashed out at Murtha’s criticism of American troops, his release on his Web site of vital information that revealed some of the weaknesses of the American military and his suggestion several months ago that America “redeploy” its troops from Iraq.

“The enemy will see this for what it is. … Redeployment means defeat,” Beamer said.

“Does it require another battle in Shanksville?” Beamer asked as he wondered aloud what it will take for America to become united in the war on terrorism.

WILLisms has the newly released ABSCAM video of Jack’s early corruption caught on tape!
Zaphriel has more on the scandal that Murtha wants everyone to forget about already.

Murtha’s negatives has allowed Irey to catch up to the bully. 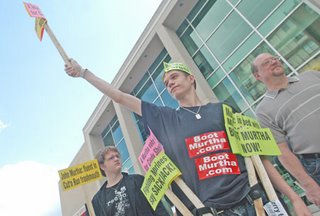 Dylan Johnson, 15, of Davidsville, trades comments with pro-Jack Murtha protesters outside the Veterans for the Truth’s anti-Jack Murtha rally in Johnstown on Sunday.
(Pitt Live)

Murtha cried at his rally this weekend that he was being “swiftboated”. What a crock!
No one is targeting his war record, just his “cold blooded”, defeatist, anti-military stands against this country, our soldiers, and this war effort.

And, there’s even more bad news for democrat Jack…
Even the New York Times wrote a negative article about his pork barrelling.
That’s bad!