Pennsylvania Republican candidate Raj Peter Bhakta slipped three elephants and a six-piece mariachi band into the Rio Grande to see how easy it was to cross from Mexico to the US! 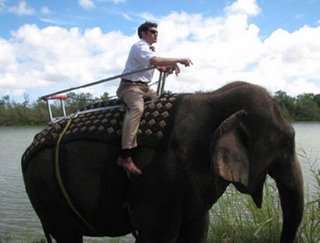 October 11, 2006 — Reports of an elephant crossing the river or people trying to smuggle an elephant across were rampant Tuesday while an elaborate political stunt was taking shape near the mouth of the Rio Grande.

It was a while later that the stunt, which was a photo shoot, was abruptly met by federal agents.

“The elephant never made landfall into Mexico, but I tell you something, he could have made 15 laps back and forth, but no one showed up,” said Raj Peter Bhakta, a former star on the NBC show “The Apprentice,” who also is a Republican candidate for the 13th District U.S. House of Representatives seat in Eastern Pennsylvania.

Three elephants, two African and an Asian, were taken out to a ranch near Boca Chica beach to perform, the 31-year-old Bhakta said.

He was in Brownsville to raise funds with friends and decided to get a first-hand look at border security while he was here, he said. 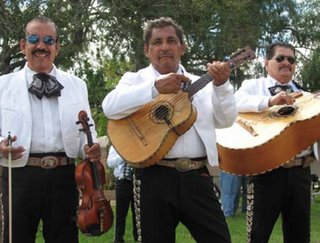 Raj is scheduled to be on Bill O’Reilly later today.
AllahPundit has the video.