50 years ago this week the Hungarian people rose up against the Soviets. Several hundred Hungarians lost their lives as Soviet tanks put an end to hopes of democracy…

President Bush honored the democratic patriots of the Hungarian Uprising of 1956 in June of this year. 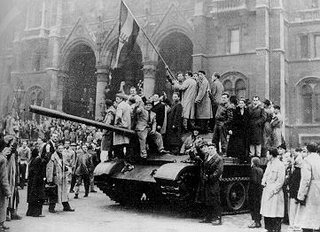 Soviet tanks in Budapest, Hungary in 1956. Radio Free Europe broadcasts encouraged the Hungarians to battle on in the false understanding that they would receive reinforcements from the West. (filolog)

I am emailing from London UK in response to your post about young 2nd Lt Joshua Booth.

This week marks the 50th anniversary of the Hungarian uprising. I was just 14 at the time – but I remember people young and old trying to kick out the Russians – and then the dread sight of Russian tanks moving in two weeks later, like tracking down Broadway NYC, firing shells into the buildings and machine-gunning anyone on the streets. Young people trying to throw Molotov cocktails (bottles filled with petrol) at the tanks – and being shot.

I remember a 14-year old Hungarian refugee lad ending up in the same dorm as me, at a wooden orphanage in Britain. His father had been shot trying to escape – he never heard what happened to his mother.

It all woke me up very young to what FREEDOM means – and what a heavy cost it can bear.

If it is at all possible – could you please pass on my deep condolences to Joshua Booth’s parents – and to his wife.

And my deep respect for him, for what he fought and died for. Across a wide ocean, his life bears witness to a belief in the freedom we all enjoy and take for granted – freedom he was fighting to give to the long-suffering people of Iraq.

He deserves to be buried at Arlington. 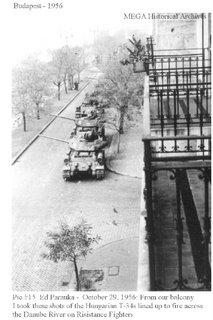 Russian tanks lined up to fire across the Danube on resistance fighters. (filolog)

Here is the story of the Hungariain Uprising he is referring to back in 1956:

The 1956 student protests began on the afternoon of Oct. 23, and by nightfall had turned into an armed uprising. Around 2,800 Hungarians and 700 Soviet troops were killed in the Red Army intervention, which began Nov. 4, 1956.

After the military defeat, strikes and protests continued for several weeks until a Soviet crackdown definitively ended the uprising in January 1957.

About 200,000 people fled the country and at least 225 Hungarians accused of participating in the uprising were executed – including Imre Nagy, the Communist turned democrat who had briefly been returned to power in 1956. The Communists remained in power in Hungary until 1989 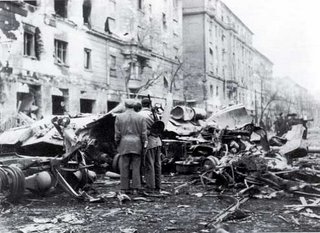 The streets of Budapest after the Soviet invasion. (filolog)

Today the situation in Hungary remains tense.
Socialist Prime Minister Ferenc Gyurcsany in a taped speech to party insiders which was leaked to the media, said that his party and government had lied to win April’s election. Ferenc has refused to step down even after this confession. The political climate remains tense since the illegal and immoral words of the Prime Minister were made public.