There was relative calm in France overnight as only 277 cars were torched. 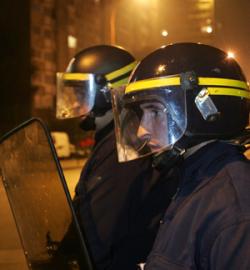 Despite the torched buses and attacks on police and, authorities said that the violence could have been much worse:

Three or four young people burst onto a bus in the southern French city and tossed in a bottle of flammable liquid before fleeing, police said, citing witnesses’ accounts. A fire stared, seriously injuring a 26-year-old woman who suffered second-and third-degree burns on her arms, legs and face.

Three others were taken to a hospital to be treated for smoke-inhalation, police said. The bus was destroyed.

On an average night in France, up to 100 cars are torched. In a statement, the Interior Ministry described the anniversary night as “relatively calm.”

The unrest could have been much worse.

Bouna Traore and Zyed Benna will be remembered with their own French monument.

French authorities dedicated a monument to the two youths who were electrectuted when they hid from police:

The families of the two dead youths, Bouna Traore and Zyed Benna, laid wreaths at the electricity sub-station where they were electrocuted.

A monument to the boys was unveiled and the local mayor appealed for calm.

Of course, the thugs are only depraved because they are deprived.

And… Here is some helpful advice if you are planning a trip to Gay Paris.