“Hanging Saddam would bring the end of civiliation as we know it.”

When I saw this headline tonight I figured it was Democrat… 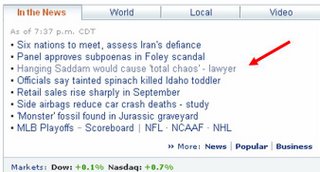 …Ramsey Clark who they were talking about.

Here’s the story about poor abused Saddam Hussein from the AP:

Former U.S. Attorney General Ramsey Clark, a member of Saddam Hussein’s defense team, predicted on Thursday that a bloodbath would follow should an Iraqi court trying the former president have him executed.

At a news conference, Clark said he feared that should Saddam and the others be hanged, “catastrophic violence” would follow that would lead to “the end of civilization as we know it in the birthplace of civilization, Mesopotamia. Total, unmitigated chaos.”

Saddam’s Sunni Muslim tribe of 1.5 million would be enraged over what they would consider the revenge killing of the former president by the Shiite-controlled and U.S.-sponsored government, Clark said.

Clark, 78, was attorney general under President Johnson despite opposing the Vietnam War and has been best known since for defending people with unpopular causes. Besides Saddam, he has worked with blind Egyptian cleric Sheik Omar Abdel-Rahman, a planner of the 1993 World Trade Center bombing, and American Indian activist Leonard Peltier, convicted in a 1975 gunfight at the Pine Ridge Indian Reservation in which two FBI agents died.

I have a feeling that Ramsey will be the only one crying at the Butcher’s funeral!