Less than a mile from Windsor Castle a group of British soldiers were forced to leave their rental due to attacks by radical Muslims. 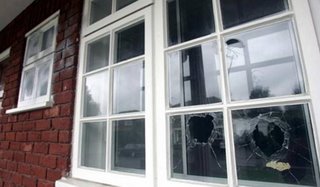 The house in a village near riot-torn Windsor had BRICKS thrown through windows and was DAUBED with messages of hate.

Four young Household Cavalry officers who had planned to rent it were also the target of phone THREATS.

They were yesterday forced to look elsewhere to live — after top brass warned them against inflaming racial violence near the Queen’s Windsor Castle home.

Colleagues of the officers branded the vandalism a “disgrace”. A source at the regiment said: “These guys have done nothing but bravely serve their country — yet they can’t even live where they want in their own country.” The £3,000-a-month detached home in picturesque Datchet, Berks, is less than a mile from Windsor Castle. It was attacked as extra police were drafted into Windsor — where battles have raged for days between Asian and white gangs.

On Wednesday a Muslim-run dairy was firebombed. 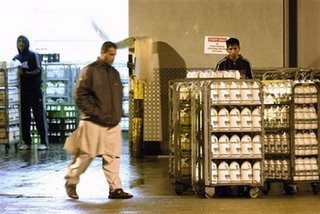 Workers stack crates of milk at the Muslim-owned Medina dairy in Windsor, England Thursday Oct. 5, 2006. The Muslim-owned dairy has been targeted by white youths over three nights in a campaign of harassment culminating in a petrol bombing, a worker said today. (AP)

The young officers — from the same regiment as Prince Harry — had planned to use the four-bed house for rest and recuperation after months risking their lives on the frontline.

Louts struck two days after the four arrived in uniform in an Army Land Rover to view it.

The source said: “A gang of local Muslims set about keeping them away. They hurled bricks through the windows and then wrote offensive graffiti across the front of the house.” The vile messages included one in 4ft letters on the drive — warning: “F*** off”.

Sources inside Windsor’s Combermere Barracks — where the officers are based — confirmed Muslims had made calls threatening the men.

A Household Cavalry insider said of the Muslims’ insult to Britain’s heroes: “Everyone in the regiment is really upset. It’s one thing coming under attack in Helmand in Afghanistan but quite another getting this abuse in England. The officers were determined to face down the yobs and still move in — but didn’t want a race riot on their hands.”

Tory MP Philip Davies said of the attack: “This is outrageous.

“If there’s anybody who should f*** off it’s the Muslims who are doing this kind of thing. Police should pull out the stops to track down these vile thugs.”

Sir Andrew Green, director of the think-tank Migrationwatch UK, said: “Incidents like this are absolutely inexcusable and seriously undermine efforts by all sides to achieve integration. Those who choose to live in this country owe a loyalty to Britain.”

Fausta has more including video of the Windsor rioting.