The French soccer match was interrupted as officials searched for the fireman’s fingers. 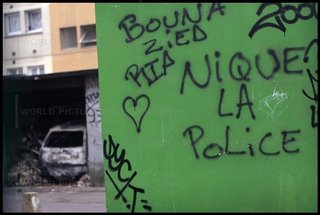 View taken 27 October 2006 in Clichy-sous-Bois in the northeast Paris suburb shows a burnt car in its garage (left) and a a graffiti on a wall saying “Nique la police” (f*ck the police) and with the name of the two teenagers “Bouna and Zied” who died of electrocution after they fled from police last year. (WPN)

A fireman lost two fingers after a firebomb was thrown from the stands at a soccer match in Nice, France:

The Ligue 1 match between Nice and Olympique Marseille was suspended for five minutes after a fireman was hurt by a firebomb, security sources said on Sunday.

The match was interrupted while stewards in the Stade du Ray were trying to find the fireman’s fingers.

No Pasaran! has more on this disturbing trend.

Not even the new monument dedicated this past weekend could keep the firebombs out of the soccer matches in France.

Maybe if the French built a new memorial dedicated to the disenfranchised soccer fans this sort of thing would stop. 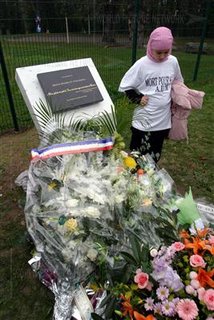 The monument at Clichy-sous-Bois College to honor Zyed Benna and Bouna Traore who died on Oct. 27, 2005 by accidental electrocution while fleeing a police identification check. (WPN)

ACLU?… AC-Le Feu?
What is this about? Members of the surburban citizen group “AC-Le Feu” attend a march, in Paris, Wed. Oct. 25 2006, in memory of two youths who died, one year ago in Clichy-sous-Bois (North Paris). This dramatic accident while the youths were pursued by police, provoked riots all around French suburbs. One year after, AC-Le Feu presents to lawmakers a collection of 20 000 complaints concerning life conditions in poor neighboroods. (WPN)