You run from police… You accidentally get electrocuted while hiding from police at an electrical substation… You get a monument built in your honor!

A monument is unveiled to honor Zyed Benna and Bouna Traore who died on Oct. 27, 2005 by accidental electrocution while fleeing a police identification check.

A silent march ended in a mostly immigrant Paris suburb on Friday where French officials unveiled a monument to two youths who died while fleeing from police:

Relatives and friends of two French teenagers who were electrocuted as they fled from police a year ago have gathered in Clichy-sous-Bois near Paris. A plaque was unveiled in front of their school, and a wreath-laying ceremony was held at the power sub-station where the teenagers tried to hide.

The deaths of Zyed Benna and Bouna Traore sparked three weeks of violent riots in France’s poor suburbs as the young and unemployed vented their anger over what they saw as lack of opportunity and racial discrimination. The crowd gathered in silent prayer wearing t-shirts with the slogan “Dead for nothing”.

They also laid wreaths at the electrical sub-station. 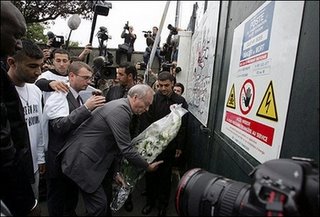 Socialist mayor of Clichy-sous-Bois in the northeast Paris suburb, Claude Dilain(C), lays a wreath at the entrance of an electrical sub-station where two teenagers, both of immigrant background, were accidentally electrocuted as they hid from the police a year ago.(AFP/Dominique Faget)

Maybe the French think this tactic is working as only 227 cars and two buses were torched on the anniversary of the two boys deaths rather than the usual 100 that are torched on an average night.

And… More insanity in Sweden.

Reader Beto Ochoa dedicated this poem to the French surrender:

France surrendered to itself at last
The thugs have ruled the day
And if you think that’s not the fact
I’ve swampland in the Bay.
Where you may build your castle fair
To be so near the shore.
Where nature thence
Will take thee hence
And ye will be no more.