During his first arrest at age 17 Sanjari was kept in isolation for several months for his activism.

During the violent clashes this weekend between supporters of the senior Shi’ite Muslim cleric who has challenged Iran’s system of clerical rule and the regime, student activist Kianoosh Sanjari went missing.

After almost 12 hours, there is no news about Kianoosh Sanjari , political activist and a member of Allied student front arresting yesterday with supporters of Ayatollah Boroojerdi when he reported that event !

As most of arrested protesters were sent to section 209 of Ewin prison, it is guessed that he is in 209 !

According to what witnesses said , injured protesters were transferred to Imam Khomeini Hospital and some near hospitals.

What a powerful image…
B Namus on the coming revolution… 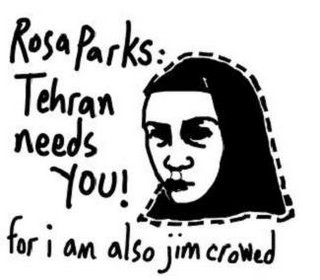 It is not the first time that Sanjari has been detained by the mullahs:

Sanjari, who was arrested on June 23rd, 2005, was released on Tuesday, Oct. 11th, following an $11200 bail. He was charged with “action against the security of the nation” and “collaboration with Iranian opposition members.”

Sanjari whose belongings, including his computer, mobile telephone, books, files, etc. were confiscated by the secret service agents, was not even permitted to be represented by a defense lawyer during his detention. 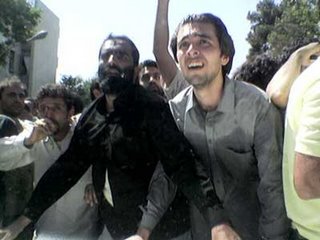 A picture from the mass dissent in Tehran on Saturday.