Allen Roth writes that the Telegraph is the first mainstream news source to report on the slaughter of Tibetans fleeing to Nepal by Chinese forces.

A Slovenian climber, Pavle Kozjek, caught the attack on film from his perch on Mt. Everest. Several international climbers hoped for thrills but did not expect to witness the horrific slaughter of Tibetans by Chinese forces at the Nangpa La Pass.

Pavle Kozjek, who has a website ExtremeKanal, was one of several international climbers to see the Chinese open up on the fleeing Tibetans. 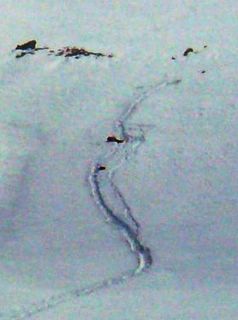 Detail cut out image of the body of the Tibetan nun, left in a snow path. Courtesy of Pavle Kozjek (MountEverest.net)

At the end of their terrible journey, a group of Tibetan refugees yesterday told how a nun was shot dead and 14 children taken away at gunpoint by Chinese border guards during a 20-day march to escape across the Himalaya.

Seventy-five men, women and children started out, often walking at night to avoid security patrols but only 41 made it to the Nepalese capital Kathmandu, leaving the young nun dead in the snow and another man lying wounded. The remainder, including the children, were marched away at gunpoint.

The shooting was witnessed by scores of westerners camped nearby.

A 24-year-old woman described her escape as the survivors laboured up the snowbound 18,753ft Nangpa Pass linking Nepal to Tibet.

She said: “We were walking in line. Before the shooting we knew the soldiers were after us so we started to walk quickly. They warned us to stop, then started shooting. We were running. The bullets were landing near us. The nun who died was 100 yards ahead of me. I saw her fall. I was lucky. A bullet tore my trousers, but it missed me.”

They walked past the body of the dead nun, who, she said, was 17-year-old Kalsang Namsto, face down in the snow with a bullet wound in her back. Another victim, Kunsang Namgyal, 20, was shot twice in the leg and arrested, the refugee said.

The party had started that day’s march at 8pm the previous evening and the young woman was finally able to rest 28 hours later when she fell asleep on some rocks inside Nepal at midnight on Sept 30. 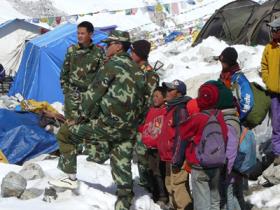 MountEverest.net posted pictures of the Chinese attack on the refugees by a Slovenian climber in the area at their website:

41 Tibetan Nangpa La shooting survivors, all between 7-30 years old, have arrived at the Tibetan Refugee Transit Center in Kathmandu. Cared for and interviewed by the International Campaign for Tibet, the refugees report that in addition to the killed nun, a 20 year old boy was wounded in his leg by bullets. Here goes a rerun from last nights story:

An eye witness, a monk, told the Phayul news source that the group begged mountaineers for food after walking for 20 days through Tibet and were eating when 5 soldiers arrived. Shots were fired for about 15 minutes and the refugees ran for their life through knee deep snow.

An American climber reported to ExWeb, “Without warning, shots rang out. Over, and over and over. The line of people started to run uphill – they were at 19,000ft. 2 people were down, and they weren’t getting up.”

A British climber told Save Tibet that climbers “could see Chinese soldiers quite close to Advance Base Camp kneeling, taking aim and shooting, again and again, at the group, who were completely defenceless.”

Romanian climber Sergiu Matei, reported,”The Chinese militias were hunting Tibetans onto the glacier…shooting them like rats, dogs, rabbits – you name it.” Sergiu said that bodies were buried on the glacier in the presence of a lot of climbers, and other people, “like if there was no one there to see it.”

Sergiu wrote that he found one of the refugees hiding in the expedition toilet tent. The climber fed him and gave him warm clothes. Later, the refugee managed to flee over the pass.