Claire McCaskill should have known better.

You can’t put out a bogus TV ad about the Missouri Veteran’s Administration, refuse to release supporting documentation, and not expect to take heat for it!

Not in the “Show Me” state!

The McCaskill Campaign is still taking heat for the bogus veterans ad attacking Missouri and Jim Talent.
Here is the latest segment that aired last night in St. Louis. on FOX 2 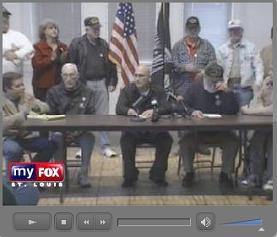 The Video is HERE.
You be the judge!

KMBC-TV out of Kansas City investigated the campaign ad by Claire McCaskill attacking Jim Talent for his veteran’s services record in Missouri.

The McCaskill Campaign was forced to pull the ad from TV but it is still up and running on YouTube.

In the ad the veteran, Josh Lansdale said he came back from Iraq with a busted ankle and post traumatic stress disorder. He claims it took him 6 months to see a doctor… with a broken ankle! Now he won’t release his records.

On October 12th I talked with Colonel Jack Jackson, a well known Missouri veteran who is disputing the ad. I was told that the Veterans Administration Medical Center in Kansas Cityhas no record of appointments for a Josh Lansdale.
This has not been verified at this time. Colonel Jackson is interviewed in the linked video playing on FOX2 News.

The Missouri veterans endorsed Jim Talent in September, by the way.

The McCaskill Campaign has pulled the ad from her website.
The ad was still on the website last week. No explanation was given.

Betsy has more on the voter ID bill that has democrats crying foul, despite the local ACORN scandal that implicates the McCaskill campaign.

Update: From Ali and The Source:

Lansdale is a liar and fraud. I was in Iraq with this turd and I know what he did and DIDN’T do! I have called the VA, and the 487th Engineer Detachment members are fully aware of what he is up to. Hey Josh, I didn’t realize you could get PTSD from playing combat video games. It’s time to expose you for what you are.

Lansdale says he will not share his record with anyone.