** There is a massive scandal brewing in Missouri! **

St. Louis ACORN workers, who have still not been paid by the way, reveal that all of the people who were being trained at ACORN headquarters (many at the same time) were told to go out and canvas for “(Democrat) Victory 2006” and Claire McCaskill!

PubDef has the amazing video HERE. 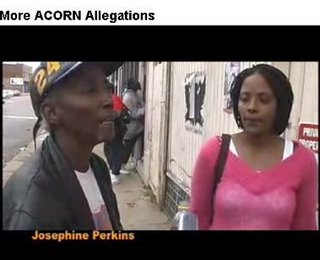 The ACORN workers say there are over 100 people who have not been paid! ACORN, of course , is the voice of the low and moderate income employees in our communities.

Here is the latest report on this growing and massive democratic scandal from PubDef:

There is no evidence of a direct link between the McCaskill campaign and ACORN’s GOTV efforts. But several ACORN workers told PUB DEF that they were told by ACORN managers that the effort was part of “Project Victory 2006”, which is also the name for the Missouri Democratic Party’s GOTV campaign.

Josephine Perkins, a 10-year veteran ACORN worker whose allegations of improper and illegal GOTV activities we first reported in an exclusive video report two weeks ago, was also at the office Tuesday picking up her last check from the organization.

Perkins told PUB DEF that FBI agents visited ACORN last week and that afterwards, managers at the organization instructed some employees not to cooperate with their investigation. [We will be following up on this part of the story later this week.]

Perkins and others again named Johanna Sharrard, ACORN’s new political field director, as one of those giving instructions to get out the vote for McCaskill along with their efforts on behalf of Proposition B, the proposal to raise the state’s minimum wage.

When we attempted to interview Ms. Sharrard again to respond to these allegations, we were asked to leave ACORN’s offices. We were told that no one was available to speak to us on the record.

Just for your reference…
The Missouri Democratic Party’s campaign effort this year to elect Claire McCaskill to the senate is called “Project Victory 2006”:

Missouri is one of the largest battlegrounds in the quest to retake the U.S. Senate in 2006. Currently, this race is the highest pick-up target for Senate Democrats, and is sure to be a topic of political discussions nationwide. In addition, Missouri is a perpetual battleground state that is critical to the future success of the Democratic Party.

Please Note: Josephine Perkins (pictured above) was let go by ACORN as a supervisor after she confronted them about their illegal practices.

The news was not good for Claire today:
First the questions about her finances then this.