Free Thoughts has the latest from Londonistan including this news from the Daily Mail:

Female students at a new Islamic school will be made to wear head scarves regardless of their religion, it was revealed yesterday.

The Madani High School in Leicester will be required by law to accept 10 per cent of its 600 pupils from a non-Muslim background.

But girls who are not Muslim will still have to abide by a rule insisting all female pupils cover their heads as part of the uniform.

Assistant principal Zainab Elgaziari said he did not regard the demand as a problem – despite the ongoing row over Muslim women’s veils.

Meanwhile, Islamic protesters are raging at Jack Straw over his demands for Muslim women to remove their veils when visiting his office. 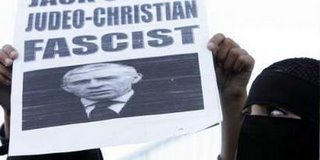 A Muslim woman wearing a veil known as a Niqab, protests outside a constituency meeting with Britain’s Leader of the House of Commons Jack Straw, in Blackburn, northern England October 14, 2006. (Reuters)

Melanie Phillips, of Londonistan fame, has thoughts on the latest British hoax.