It’s not about the strong economy, or the budget deficit, and with sound bites like this one where Harry Reid and the Democrats brag about killing the Patriot Act… democrats sure don’t want it to be about homeland security.

Instead…
Mike Rogers the self-hating radical gay leftist and the democrats are making this years election about outing gays as promised back in March of 2005. 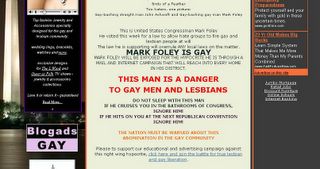 Today the Left continued their midterm campaigning and “outed” another Republican.
Patterico has the scoop.

In today’s democratic party it’s not about being black– as you can see from the attacks on Michael Steele just this week– and it’s not about being gay – as you can tell from their current campaign to out Republicans – and it’s certainly not about free speech when you have storm troopers taking out conservative speakers…
It’s about silencing and threatening the opposition no matter how despicable.
Welcome to the Election 2006!